Following a review of roads in Lancashire and collision related casualties the following routes have been proposed for average speed camera systems. Some updates were announced to these routes in May 2017, extending the A565 route to Tarleton and shortening the A583 route through Little Plumpton.

All routes are covered in both directions. 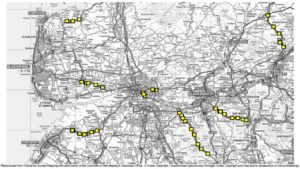